Explore this chic coastal town in the North Island and you’ll discover the land of the Māori. Tauranga’s white sand beaches offer something for everyone. Relax and sunbathe on one of New Zealand’s most beautiful and popular coasts. Take a dip in the ocean or immerse yourself in a lush waterfall swimming hole. Watch dolphins frolic in the waves or swim with these lovable creatures. Learn to sail, try surfing, take a diving lesson, or refine your fishing technique. If you’re a landlubber, you can tee up at a golf course on your Tauranga cruise or stroll down The Strand where you can enjoy cafés and a vibrant nightlife. Journey to charming waterfalls or board one of the many eco-cruises available in the Bay of Plenty. Sometimes called the New Zealand Riviera, downtown Tauranga offers galleries, shops, history, and a vibrant café and restaurant scene. The culinary culture brings together innovative chefs working in diverse traditions. Enjoy Italian, Indian, Turkish, Thai, French, and fusion flavors. Tauranga offers something to tantalize every taste.

While at sea, take the time to recharge before the next adventure. Lounge by the pool, be spoiled at the spa, enjoy great food or explore the many other opportunities on board until we arrive at the next amazing destination.

Discover Art Deco architecture in an alluring seaside town, and some of Hawke’s Bay’s finest wineries. Napier’s devastating 1931 earthquake resulted in a magnificent rebuilding effort that makes the city home to the greatest density of Art Deco buildings in the world. Stroll along Napier’s lovely streets and admire the architecture characterized by bold symmetrical shapes, linearity balanced by gentle curves, and sometimes intricate ornamentation. Visit lovely cafés, restaurants, and shops as you explore Napier’s seaside sights. Journey outside the city to explore some of New Zealand’s most spectacular wineries in Hawke’s Bay. Tour the wineries and enjoy exclusive wine tastings. Bird watchers and eco-tourists can visit Cape Kidnappers to admire the world’s largest gannet nesting site.

A charming seaside town at the head of Queen Charlotte Sound, Picton was settled by early 19th century whalers. Today it is a bustling seaport surrounded by award-winning restaurants, delightful local art galleries, water sports’ activities and beautiful yet challenging nature trails. Take an adventurous hike along the famous Queen Charlotte track and experience the photogenic flora and unique fauna of New Zealand. Since the climate of Picton is always temperate in any season, you can take in stunning coastal views, mystical waterfalls and diverse wildlife.

Bordered by hills and the Pacific Ocean, Christchurch is situated on the edge of the Canterbury plains which stretch towards the Southern Alps.Despite the impact of significant earthquakes in 2010 and 2011, Christchurch continues to be an innovative, fun and fast-changing city. The city centre is compact with the central feature being the Avon River. From gardens to galleries, markets to museums, there is a taste of Christchurch’s unique culture at every turn. Christchurch offers an array of activities both inside and outside.

The architecture, scenery, and culture—if not the accents—borrow heavily from those in Edinburgh, Scotland. Take a harbor cruise to spot albatrosses, cormorants, and other sea birds. You might even see penguins, dolphins, and seals. In town, stroll the spectacular Dunedin Botanic Garden, discover ancient Maori artifacts in the Otago Museum, or learn all about beer at Speight’s Brewery—touring, tasting, and shopping for beer gear. Browse several engaging art galleries in the central Octagon neighborhood, also known for bars and cafés. Look for experimental exhibitions at Blue Oyster Gallery, bespoke jewelry at Chris Idour, old masters at Dunedin Public Art Gallery, the Reed Gallery and New Zealand artists at the De Novo and Milford galleries. Head inland aboard Taieri Gorge Railway, departing from the charming gingerbread Dunedin Railway Station, for a four-hour excursion past former gold-mining sites. Venture out to Otago Peninsula and visit 19th-century Larnach Castle—New Zealand’s only castle—perched on a hill overlooking the harbor. Hear stories of scandal, tragedy, and intrigue—all part of its lavish history. Top off your cruise to Dunedin with Highland dancers and bagpipers at Larnach.

Dusky Sound – Steep cliffs – carved over centuries by dozens of waterfalls – surround Dusky Sound, the largest and most complex of the many fjords along the New Zealand coast. It’s also a wildlife paradise with seals and dolphins patrolling the water, and birds like broad billed prions, mottled petrels and sooty shearwaters floating on the overhead thermals.

Doubtful Sound – As cold mountain water cascades from the cliffs above Doubtful Sound, it creates an unusual phenomenon-a dual-layered marine ecosystem of fresh and saltwater. This serves as a playground for a number of species, including fur seals and two types of penguins – the fjordland crested penguin and the blue penguin

Milford Sound – As we sail into the narrow fjords of the Milford Sound, even your massive ship seems to shrink in comparison to the towering cliffs topped by lush mountain terrain. Situated within Fiordland National Park, this natural wonder is part of the Te Wahipounamu World Heritage Site and is protected by its natural geography, which makes it a haven for all types of wildlife.

While at sea, take the time to rest and relax before the next adventure. Lounge by the pool, be spoiled at the spa, taste the delicacies or explore the venues on board until we arrive at the next amazing destination.

Eden is a small community on the east coast of Australia surrounded by wide beaches and imposing seaside cliffs. Popular activities include bay cruises and whale-watching tours, since a migration route for whales coming from the Antarctic sea passes right by the port. In town visitors will want to see the Killer Whale Museum, established in recognition of the importance of killer whales to the region. Local lore has it that when the community made its living by whaling, the whalers were assisted by pods of killer whales, who would drive the migrating baleen whales into the town’s harbor. 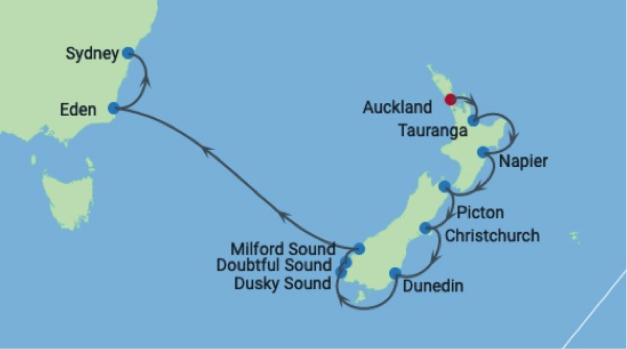 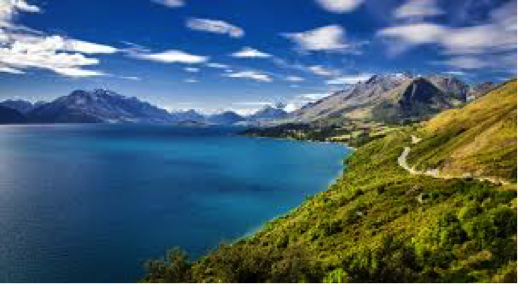 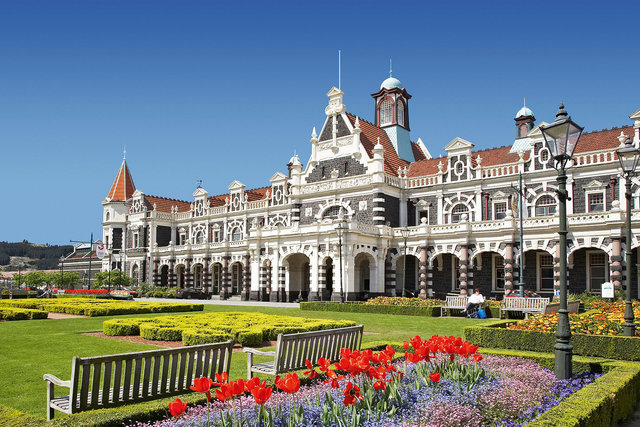 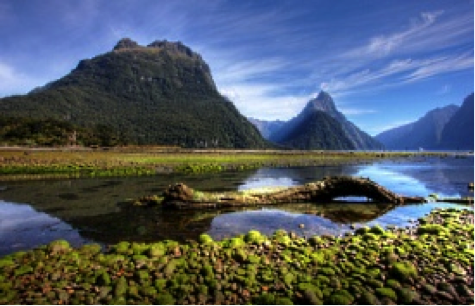 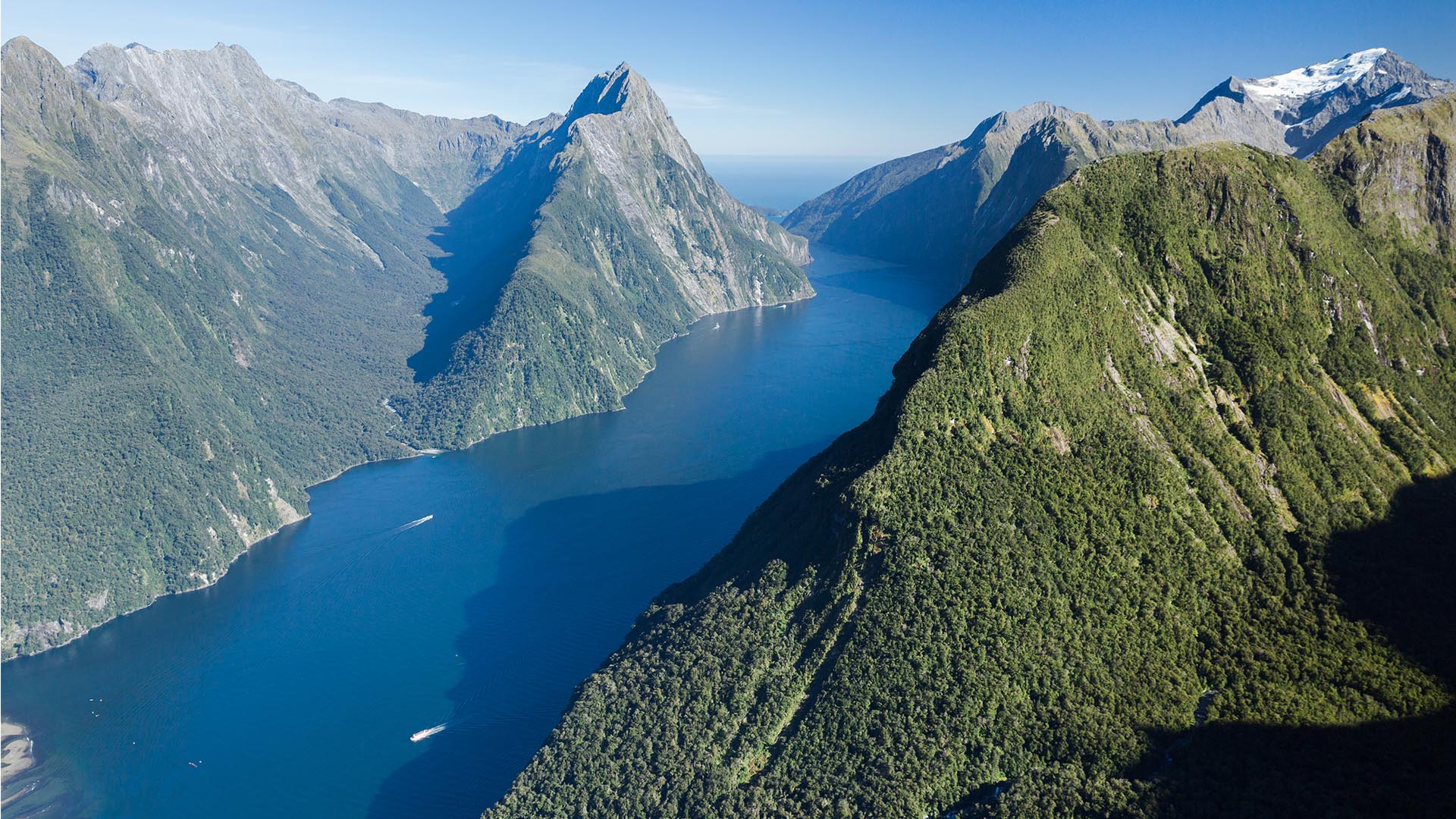