Arrive in Shannon and transfer to Limerick. After checking into your hotel, you have free time to relax, use the hotel’s amenities, or explore the city. You may wish to visit St. Mary’s Cathedral, King John’s Castle or the Hunt Museum. Tonight, you’ll enjoy an Irish Medieval Banquet.

Depart by motorcoach for the Cliffs of Moher. Take in panoramic views of the Clare coastline passing through the sleepy villages of Kilkee and Kilrush before arriving in Killimer for the ferry crossing to Tarbert. Arrive in Killarney and enjoy a fun-filled horse-drawn Jaunting Car Ride to ancient Ross Castle on the shores of Lough Leane. Dinner is included this evening at your hotel.

Follow the road known as the “Ring of Kerry” for a spectacular 100-mile panoramic drive around the island’s south western tip and take photos of the vistas of the Lakes of Killarney from Ladies View. Here mountains, valleys, lakes and sea blend into a landscape that is often breath-taking beyond words. Lunch will be on your own in a local town. Continue on to Muckross House, situated close to the shores of Muckross Lake amidst the beautiful scenery of Killarney National Park. The house is a focal point within the park and is the ideal base from which to explore its terrain. Tonight, enjoy dinner with entertainment at a local pub.

At picturesque Glengarriff board a private boat for the short crossing to Garinish Island, whose warm waters attract colonies of seals. Follow the winding paths between the strong-scented flowering trees and shrubs of this lush tropical island garden. Next, make your way to The Queenstown Story in Cobh, which explains the strong linkage between Ireland and America. From 1848 to 1950, more than 6 million adults and children emigrated from Ireland to America. More than 2.5 million departed from Cobh, making it the single most important port of emigration. Overnight in Cork, Ireland’s second-largest city.

After breakfast, transfer to Cork International airport for your flight to London (Heathrow). Upon arrival, transfer to Southampton to embark your ship.

The British isle of Guernsey lies just eight miles off the coast of France. The second largest of the Channel Islands, Guernsey possesses a mild climate, breathtaking scenery and a peaceful, unspoiled ambience. All these attributes combine to make it a popular destination for British and French vacationers. Once the haunt of sea dogs and pirates, St. Peter Port is one of the prettiest harbors in Europe.

Castles and forts dot the Guernsey coastline, including German fortifications from World War II. The Channel Islands were the only part of the United Kingdom to be occupied by the Nazis.

Founded in the 7th century by St. Fin Barre, Cork is your gateway to romantic Ireland. Stroll down narrow country lanes or see the Lakes of Killarney. The intrepid visitor may scale the narrow passages of Blarney Castle to kiss the Blarney Stone. The region around Cork is also home to one of the densest concentration of prehistoric monuments in Western Europe. And, in a land where fable and fact blend to become folklore, it was near Cork that the great Tuatha De Danaan, a race with magical powers, was driven underground by the conquering Celts.

Cobh was the single most important port of emigration from Ireland.

Note: Your ship will dock in Cobh which is about 15 miles from Cork.

Dublin has experienced a renaissance. Today, this gracious and cosmopolitan city on the Liffey is one of Europe’s premier destinations. The capital of the Republic of Ireland, Dublin is an intimate place that is easy to explore. Stroll past St. Stephen’s Green or survey the gray, stone façades of Trinity College, Ireland’s oldest university. The city is also remarkably well-preserved – every June 16, scholars retrace the paths of James Joyce’s characters in the novel “Ulysses,” set in Dublin on June 16, 1904.

Dublin possesses a storied history. A settlement has existed on the banks of the River Liffey for at least a millennium and a half. Succeeding waves of Gaelic, Viking, Norman and English invaders have left their mark on the city.

Dún Laoghaire gets its name from the Irish translation Fort (Dún) of Laoghaire as it was once the seat of King Laoghaire, the ancient High King of Ireland. The town is on the east coast of Ireland, about seven miles south of the capital Dublin and its focal point is the splendid harbour.

The capital of Northern Ireland – part of the United Kingdom – Belfast has experienced a renaissance since the Good Friday Agreement of 1998 that promised an end to the decades-old “Troubles” between Catholics and Protestants. Stretching along both sides of the River Lagan, this graceful city of Victorian and Edwardian buildings has become a cosmopolitan tourist destination. Once a major industrial center, Belfast is also your gateway to the rich, Irish countryside of Counties Antrim and Down.

Belfast was an industrial giant in the 19th century, famed for its linen and its shipyards. Explore this exuberant city, marvel at the Giant’s Causeway or shop for superb Irish linens.

Glasgow was Scotland’s great industrial center during the 19th century. Today, the city remains the commercial and cultural capital of the Lowlands. Lying on the banks of the River Clyde, Glasgow boasts some of the finest Victorian architecture in the entire United Kingdom, including the stately City Chambers. Elegant Princes Square offers excellent shopping, and among the host of museums and galleries, the Burrell Collection features a superb treasure trove of paintings and art objects.

Just north of Scotland lay the Orkney Islands. Washed by the furthest reach of the Gulf Stream, this chain of over 70 islands offers dramatic landscapes that range from sea cliffs rearing 1,000 feet above the waves to sweeping white sand beaches. Bird watchers flock to the Orkney Islands, drawn by the multitudes of sea birds. Divers explore the wrecks lying in the clear waters of Scapa Flow, the Royal Navy’s fleet anchorage in two world wars. And most fascinating of all, the Orkney Islands boast the greatest concentration of prehistoric sites in all Europe, including the mysterious Ring of Brodgar and 5,000-year-old Skara Brae.

Vikings – Norsemen – ruled the Orkney Islands from the 9th to 13th centuries, leaving in their wake such monuments as St. Magnus Cathedral in Kirkwall. This hint of Scandinavian influence can be heard in the lilting accent with which Orcadians speak.

In 1933, an enterprising editor in Inverness enlivened a slow news week with the story of an odd sighting in Loch Ness. The legend grew overnight – and today individuals still scan the dark waters of the Loch for a sight of Nessie, the Loch Ness Monster. Legend goes back as far as the 6th century and insists that the celebrated Loch Ness Monster inhabits a cave beneath the picturesque ruins of Urquhart Castle. Welcome to Invergordon, your gateway to Loch Ness and that area of the Highlands known as the “Great Glen.”

South Queensferry is the gateway to Edinburgh, the political, commercial and cultural heart of Scotland. Nestled between the Highlands and the Border Hills, Edinburgh is a gracious city noted for its superb skyline, its impressive collection of architecture and its beautiful parks. The streets of the elegant New Town are lined with graceful Georgian buildings, many designed by the great architect Robert Adam. Edinburgh has also exerted a tremendous cultural force on Europe and the English-speaking world. The International Festival has been one of the premier European cultural events for over half a century. Among those who have called the city home are the writers, Robert Burns, James Boswell, and Sir Walter Scott and the philosophers, Adam Smith and David Hume. To stroll the streets of Edinburgh is to experience one of the world’s great cities.

Perhaps no other place in France holds more associations for English-speaking visitors than Normandy. The historic Allied landings on D-Day – 6 June, 1944 – live on in the memories of British and Americans alike. Nor has Le Havre forgotten the dark days of the war. The port was nearly completely destroyed during the Normandy campaign. Today, Le Havre is France’s second largest port and the gateway to Paris, “City of Light,” the Norman countryside, and the historic landing beaches.

Travelers usually head for the historic landing sites or to Paris. Yet Le Havre was designated a World Heritage Site in 2005. The Musee des Beaux Arts Andre Malraux boasts one of the finest collections of Impressionist painting in the world. 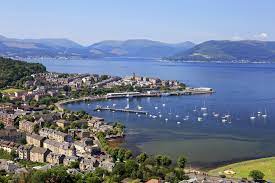